To kill two birds with one stone, we want to achieve both the best possible NOx and Pm values ​​and achieve a saving of fuel (= CO2).

To start with the latter: small vessels are often equipped with relatively large engine capacities. 280-400 hp is pretty average, because on the whole price tag of re-motorize it accounted for relatively few and diesel fuel at that time was almost free.

Using such engines as you adapt the speed to the current diesel fuel prices will consume much more fuel per hp / kw as a small engine that runs optimal speed.

Inspired by similar projects in large ships that prove to provide very favorable results  , we have devised a plan to install a diesel-electric auxiliary drive.

We have proportioned what was an efficient speed and the power output which  our current engine delivers to obtain that speed.. We came out on roughly 40 hp, 1/4 of the total power.

By making use of a high-torque electric motor and a inverter-driver according to the latest state of the art is the energy loss in the system to the lowest achievable minimum.

Our ship is in fact less suitable for this project (our engine of 150 hp is relatively small, and CO2 profit compared run at low speed is much smaller than for ships that have 300-400 hp engines). Yet even in our case (theoretically) we should achieve a slight 20% gain in fuel economy (according to the figures from the motor manufacturer).

The energy generator for the electric motor should, as stated, uncompromisingly meet the latest emission standards . 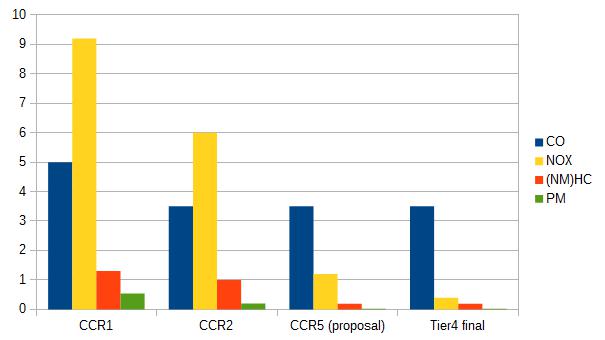 We talk about between 80 and 90% less NOx and PM compared to the current CCR2 standard .

This was by far the most difficult feat of this project. There is hardly any supply of serially built (thus affordable) engines in this performance class. In the first instance, we found a suitable engine in the new H series of Hatz .

After a visit to Electric & Hybrid navy in 2015 two other candidates yet joined.

If all the figures, in particular those of the fuel consumption, are known we`ll cut this knot.

Although little is known of the trail towards an economy without fossil fuels and therefore all options are still open, we do take a lead here by fitting the electric motor. Virtually all solutions using electric traction and drive.

Certainly in the automotive industry over the next 10 years great strides forward have to be expected, so that for example the fuel cell that by now  still is too expensive and vulnerable in terms of price and performance, it may easily overtake the internal combustion engine.

Fuel cells can now also work on various fossil and biological fuels through a syngas converter. In our case it is a matter of exchanging the diesel generator with a “power pack” fuel cell.